So Fresh and So Green in Puyallup

The Puyallup Farmers’ Market is one of the most successful in the state of Washington. The Market is about 30 miles south of Seattle  and 10 miles east of Tacoma  in Puyallup, WA.  It allows local farmers, artisans, food vendors, craftsmen and other retailers to sell their local goods. It is a great way for the community to shop local and get the freshest produce and flowers on the market. The Puyallup Main Street Association is the producer of the event and they do a great job. They approached BrandCraft about branding the Puyallup Main Street Association (a project we are still involved with). From our early branding discussion we realized the need for a fresh identity system of all events throughout the PMSA’s marketing touchpoints.  The first would be the Puyallup Farmers’ Market.

The Current logo (Mr or Mrs Eggplant) has been in use since 2010 and was put in use after the organization decided to go away from the original “Sunflower” logo of 2009.  Both logos served their purpose, but the PMSA organization wanted a strong identity system that set the Puyallup Market apart from the others in the state.

The staff liked the thought of returning to the sunflower image because of the connection to a local artist who originally provided inspiration for the design. We liked that idea as well and the idea landed us with some initial concepts. Ultimately we decided the focus should be on an exciting and fun event that is more of a lifestyle event than a grocery event. We weren’t convinced the sunflower did that. The logo should speak effectively without saying too much – hmmm. We drew up a few concepts you can see below. 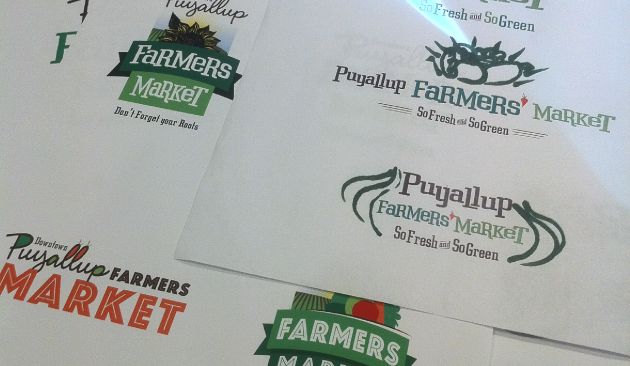 Our studio had a favorite, and we focused in on what would be the final concept early in the design process. Once the tag line “So Fresh and So Green” was added, we knew we had it! We presented it to the Main Street staff and they agreed with our direction.

We are proud to present the final Farmers Market Logo.

Look for the new logo this summer at the Farmers’ Market. 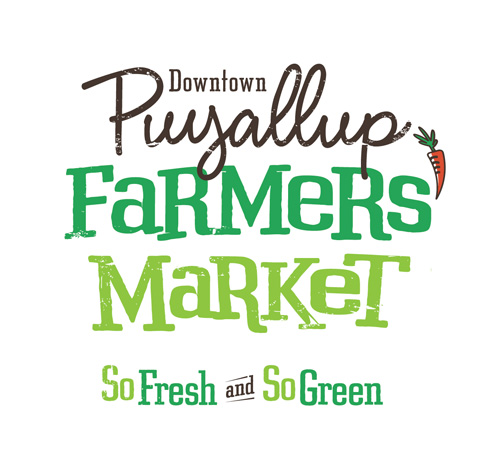